MEMORY OF THE BONES

MEMORY OF THE BONES is a feature-length documentary, which tells the story of two searches; on the one hand the search that The Argentine Forensic Anthropology Team performs for almost 30 years in their effort to locate and give identity to thousands of missing victims of human rights violations. A work which over the years has positioned them as one of the best in their field and that has led them to work in more than thirty countries.

On the other hand the story of the search of three victims of enforced disappearances families, in various conflicts and periods of our recent history; the apartheid in South Africa, the civil war in El Salvador, and the military dictatorship in Argentina. Three countries, three conflicts, three periods and three different cultures but one wish, to find an answer to the destiny of their missing relatives, and finally end up with the search. Only the recovery and identification of the missing persons remains may open the way to the truth, justice and historical reparation. Nothing but the identification of these remains can definitively end the search of relatives. But can this close permanently open wounds? Three stories linked by a single search and united by the work of the Argentinian forensic anthropology team. 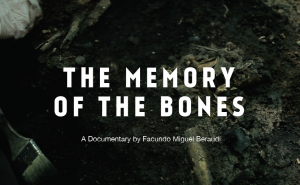